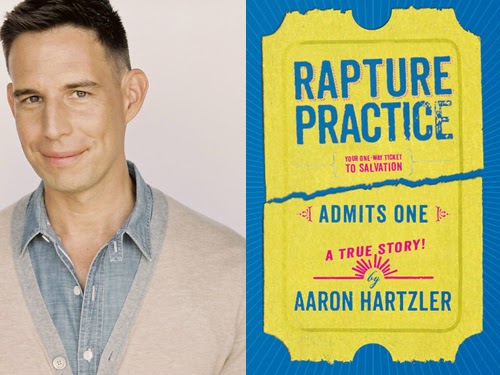 Aaron Hartzler | Website | Tweet @aaron007
Aaron Hartzler is a writer and actor whose autobiographical performances have been seen in Los Angeles, San Francisco, and New York--where he received a GLAAD Media Award nomination for Outstanding Off-Off Broadway Performance. His debut YA novel, What We Saw, will be published in 2015 by Harper Teen.

Rapture Practice: A True Story About Growing Up Gay in an Evangelical Family
(Little, Brown Books for Young Readers, 2013)
Add this book on Goodreads
What happens when the person you’re becoming isn’t the one your family wants you to be?
When Aaron Hartzler was little, he couldn’t wait for the The Rapture: that moment when Jesus would come down from the clouds to whisk him and his family up to heaven. But as he turns sixteen, Aaron grows more curious about all the things his family forsakes for the Lord. He begins to realize he doesn’t want Jesus to come back just yet—not before he has his first kiss, sees his first movie, or stars in the school play.
Whether he’s sneaking out, making out, or playing hymns with a hangover, Aaron learns a few lessons that can’t be found in the Bible. He discovers that the girl of your dreams can just as easily be the boy of your dreams, and the tricky part about believing is that no one can do it for you.
In this funny and heartfelt coming-of-age memoir, debut author Aaron Hartzler recalls his teenage journey from devoted to doubtful, and the search to find his own truth without losing the fundamentalist family who loves him.