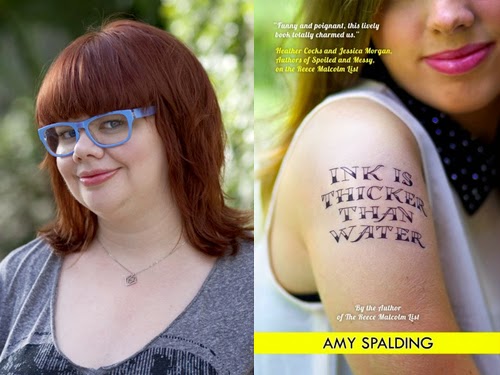 Amy Spalding grew up in St. Louis, but now lives in the better weather of Los Angeles. She received a B.A. in Advertising & Marketing Communications from Webster University, and currently works as the Senior Manager of the Digital Media team for an independent film advertising agency. Amy studied longform improv at the Upright Citizens Brigade Theatre, and can be seen performing around L.A.

Ink Is Thicker than Water (Entangled Teen, 2013)
Add this book on Goodreads

For Kellie Brooks, family has always been a tough word to define. Combine her hippie mom and tattooist stepdad, her adopted overachieving sister, her younger half brother, and her tough-love dad, and average Kellie’s the one stuck in the middle, overlooked and impermanent. When Kellie’s sister finally meets her birth mother and her best friend starts hanging with a cooler crowd, the feeling only grows stronger.

But then she reconnects with Oliver, the sweet and sensitive college guy she had a near hookup with last year. Oliver is intense and attractive, and she’s sure he’s totally out of her league. But as she discovers that maybe intensity isn’t always a good thing, it’s yet another relationship she feels is spiraling out of her control.

It’ll take a new role on the school newspaper and a new job at her mom’s tattoo shop for Kellie to realize that defining herself both outside and within her family is what can finally allow her to feel permanent, just like a tattoo. 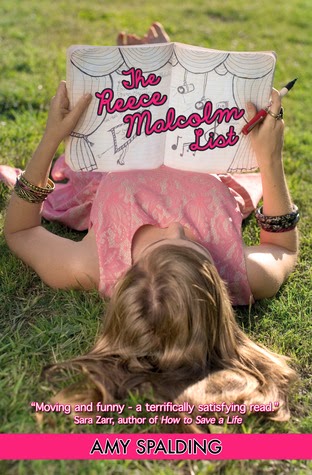 Things I know about Reece Malcolm:

1. She graduated from New York University.
2. She lives in or near Los Angeles.
3. Since her first novel was released, she’s been on the New York Times bestseller list every week.
4. She likes strong coffee and bourbon.
5. She’s my mother.

Devan knows very little about Reece Malcolm, until the day her father dies and she’s shipped off to live with the mother she’s never met. All she has is a list of notebook entries that doesn’t add up to much.

L.A. offers a whole new world to Devan—a performing arts school allows her to pursue her passion for show choir and musicals, a new circle of friends helps to draw her out of her shell, and an intriguing boy opens up possibilities for her first love.

But then the Reece Malcolm list gets a surprising new entry. Now that Devan is so close to having it all, can she handle the possibility of losing everything?