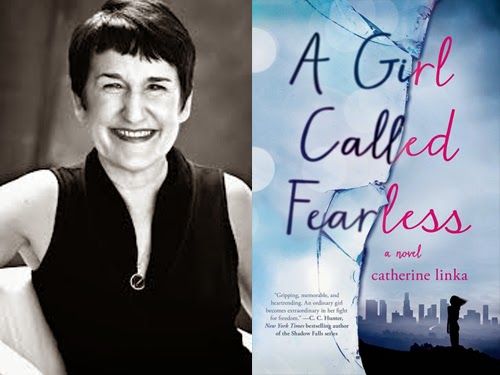 Catherine Linka | Website | Tweet @cblinka
Catherine Linka has been immersed in books her whole life, most recently as a writer and a bookseller. Her debut novel is A Girl Called Fearless, a young adult romantic spec fiction/political thriller. She lives in Southern California.

A Girl Called Fearless (St. Martin's Griffin, 2014)
Add this book on Goodreads
Avie Reveare has the normal life of a privileged teen growing up in L.A., at least as normal as any girl’s life is these days. After a synthetic hormone in beef killed fifty million American women ten years ago, only young girls, old women, men, and boys are left to pick up the pieces. The death threat is past, but fathers still fear for their daughters’ safety, and the Paternalist Movement, begun to "protect" young women, is taking over the choices they make.
Like all her friends, Avie still mourns the loss of her mother, but she’s also dreaming about college and love and what she’ll make of her life. When her dad "contracts" her to marry a rich, older man to raise money to save his struggling company, her life suddenly narrows to two choices: Be trapped in a marriage with a controlling politician, or run. Her lifelong friend, student revolutionary Yates, urges her to run to freedom across the border to Canada. As their friendship turns to passion, the decision to leave becomes harder and harder. Running away is incredibly dangerous, and it’s possible Avie will never see Yates again. But staying could mean death.
Romantic, thought-provoking, and frighteningly real, A Girl Called Fearless is a story about fighting for the most important things in life—freedom and love.