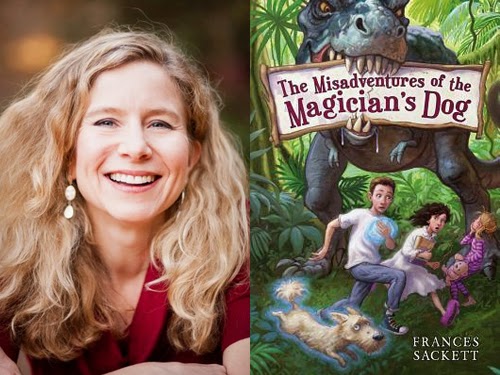 Frances Sackett is a writing teacher and an editor. She is also mother to two children who inspire her to want to tell the best stories she can. She lives in Los Angeles.


The Misadventures of the Magician's Dog (Holiday House, 2013)
Add this book on Goodreads

Peter Lubinsky doesn't even like dogs and can't understand why he asked for one for his birthday. But it turns out that this pet, whom Peter calls The Dog, can talk and do magic—and he needs Peter's help. In return, The Dog promises to teach Peter conjuring and to help him bring his father home from the Middle East, where he is deployed with the air force. Soon Peter finds himself flying through the air on a mission to rescue The Dog's master. But as Peter's magical powers grow, he finds himself filled with a dark anger.

A bedroom full of dinosaur fossils, a waiter who was formerly a mouse, and an epic battle of magician's make for a thrilling read. This imaginative middle-grade fantasy is about the power of enchantment and love.