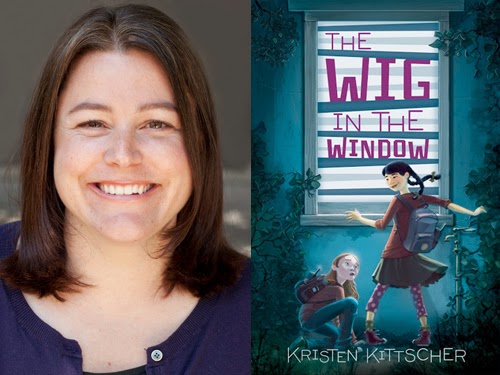 Kristen Kittscher | Website | Tweet @kkittscher
Kristen Kittscher grew up in over 13 cities, including San Francisco, Dallas, and London but she feels most at home in Southern California, where she lives with her husband, Kai. A graduate of Brown University and former English teacher, she now writes funny mysteries for the precocious middle-schoolers she once enjoyed teaching so much.

The Wig in the Window (HarperCollins Children's, 2013)
Add this book on Goodreads
Best friends and seventh graders Sophie Young and Grace Yang have made a game out of spying on their neighbors. On one of their midnight stakeouts, they witness a terrifying, bloody scene at the home of their bizarre middle-school counselor, Dr. Charlotte Agford (aka Dr. Awkward).

At least, they think they do. The truth is that Dr. Agford was only making her famous pickled beets! But when Dr. Agford begins acting even weirder than usual, Sophie and Grace become convinced that she’s hiding something—and they’re determined to find out what it is.

Soon the girls are breaking secret codes, being followed by a strange blue car, and tailing strangers with unibrows and Texas accents. But as their investigation heats up, Sophie and Grace start to crack under the pressure. They might solve their case, but will their friendship survive?

Perfect for fans of The Mysterious Benedict Society, The Wig in the Window is a smart, funny middle-grade mystery with a Rear Window twist.