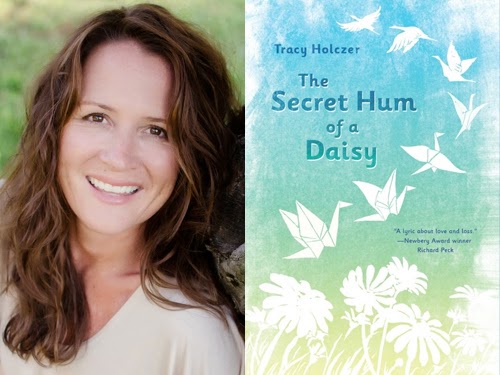 Tracy Holczer | Website | Tweet @tracyholczer
Tracy Holczer is a Middle Grade fiction writer who lives in Southern California. The Secret Hum of a Daisy is her first novel.

The Secret Hum of a Daisy (Putnam Juvenile, 2014)
Add this book on Goodreads
Twelve-year-old Grace and her mother have always been their own family, traveling from place to place like gypsies. But Grace wants to finally have a home all their own. Just when she thinks she's found it her mother says it's time to move again. Grace summons the courage to tell her mother how she really feels and will always regret that her last words to her were angry ones.
After her mother's sudden death, Grace is forced to live with a grandmother she's never met. She can't imagine her mother would want her to stay with this stranger. Then Grace finds clues in a mysterious treasure hunt, just like the ones her mother used to send her on. Maybe itis her mother, showing her the way to her true home.
Lyrical, poignant and fresh, The Secret Hum of a Daisy is a beautifully told middle grade tale with a great deal of heart.