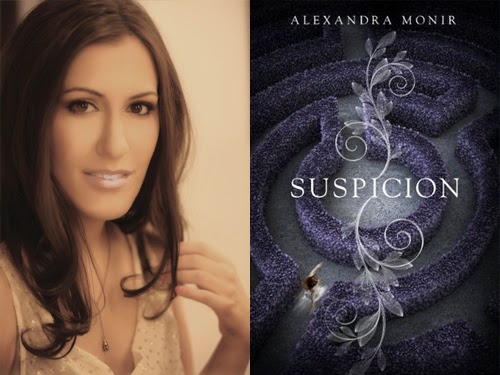 Author and recording artist Alexandra Monir broke onto the scene in her early twenties with the release of her popular debut YA novel, the paranormal romance Timeless. The book caught on quickly, landing on the Barnes & Noble Bestsellers chart and being named one of Amazon's "Best Books of the Month." The sequel, Timekeeper, was published in 2013. Suspicion marks Alexandra's first novel outside of the Timeless series, as well as her first foray into the mystery genre.


Add this book on Goodreads

Seventeen-year-old Imogen Rockford has never forgotten the last words her father said to her, before the blazing fire that consumed him, her mother, and the gardens of her family’s English country manor.

For seven years, images of her parents’ death have haunted Imogen’s dreams. In an effort to escape the past, she leaves Rockford Manor and moves to New York City with her new guardians. But some attachments prove impossible to shake—including her love for her handsome neighbor Sebastian Stanhope.

Then a life-altering letter arrives that forces Imogen to return to the manor in England, where she quickly learns that dark secrets lurk behind Rockford’s aristocratic exterior. At their center is Imogen herself—and Sebastian, the boy she never stopped loving.