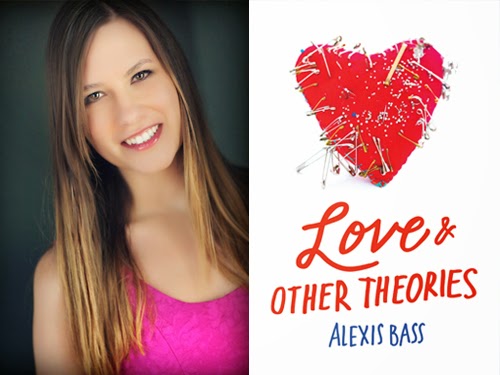 Alexis Bass grew up in Washington, went to college in Arizona, and spent her early twenties in Seattle. She currently lives in Northern California with Dylan McKay, her gorgeous and rambunctious golden retriever. She loves good fashion and good TV as much as a good book, and is a huge advocate of the three C’s: coffee, chocolate, and cheese.


Love & Other Theories (HarperTeen, 2014)
Add this book on Goodreads

If you want more, you have to give less.

That’s the secret to dating in high school. By giving as little as they expect to get in return, seventeen-year-old Aubrey Housing and her three best friends have made it to the second semester of their senior year heartbreak-free. And it’s all thanks to a few simple rules: don’t commit, don’t be needy, and don’t give away your heart.

So when smoking-hot Nathan Diggs transfers to Lincoln High, it shouldn’t be a big deal. At least that’s what Aubrey tells herself. But Nathan’s new-boy charm, his kindness, and his disarming honesty throw Aubrey off her game and put her in danger of breaking the most important rule of all: Don’t fall in love.