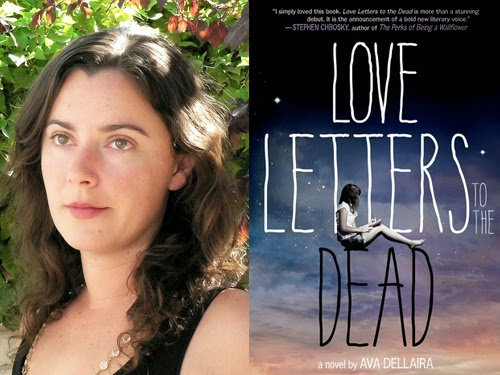 Ava Dellaira is a Los Angeles native, moved to New Mexico with her family when she was a child, attended University of Chicago, and received an MFA from the Iowa Writers’ Workshop, where she lived on the bottom floor of a farm house once occupied by Kurt Vonnegut (how cool is that?!) and studied poetry. As an aspiring screenwriter, she moved back to Los Angeles and had the good fortune to get a job working for Stephen Chbosky, the author of The Perks of Being a Wallflower.

"When I gave him some of my writing, he said, 'I think you should write a novel.' The idea had actually never occurred to me before. But that night, on my drive home, I was staring absently at the half-full moon while waiting for a red light to change, and the title popped into my head: Love Letters to the Dead. I started writing the book that night." (avadellaira.com)

Love Letters to the Dead (Harry N. Abrams, 2012)
Add this book on Goodreads

Laurel chooses Kurt Cobain because her sister, May, loved him. And he died young, just like May. Soon, Laurel has a notebook full of letters to the dead—to people like Janis Joplin, Heath Ledger, Amelia Earhart, and Amy Winehouse—though she never gives a single one of them to her teacher. She writes about starting high school, navigating the choppy waters of new friendships, learning to live with her splintering family, falling in love for the first time, and, most important, trying to grieve for May. But how do you mourn for someone you haven't forgiven?

It's not until Laurel has written the truth about what happened to herself that she can finally accept what happened to May. And only when Laurel has begun to see her sister as the person she was—lovely and amazing and deeply flawed—can she truly start to discover her own path.

In a voice that's as lyrical and as true as a favorite song, Ava Dellaira writes about one girl's journey through life's challenges with a haunting and often heartbreaking beauty.