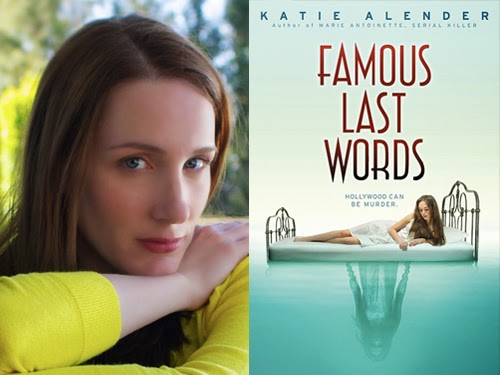 Katie Alender (rhymes with “calendar”!) moved from South Florida to Los Angeles to work in TV development and production. Her debut novel, Bad Girls Don't Die, was published by Disney-Hyperion in 2010 as the first of a trilogy. Her next book, The Dead Girls of Hysteria Hall, will be out August 25, 2015 from Scholastic. In her spare time, she enjoys writing, reading, sewing (especially quilts), practicing yoga, photography, visiting friends’ blogs, and hanging out with her family.

Willa is freaking out. It seems like she's seeing things. Like a dead body in her swimming pool. Frantic messages on her walls. A reflection that is not her own. It's almost as if someone -- or something -- is trying to send her a message.

Meanwhile, a killer is stalking Los Angeles -- a killer who reenacts famous movie murder scenes. Could Willa's strange visions have to do with these unsolved murders? Or is she going crazy? And who can she confide in? There's Marnie, her new friend who may not be totally trustworthy. And there's Reed, who's ridiculously handsome and seems to get Willa. There's also Wyatt, who's super smart but unhealthily obsessed with the Hollywood Killer.

All Willa knows is, she has to confront the possible-ghost in her house, or she just might lose her mind... or her life.