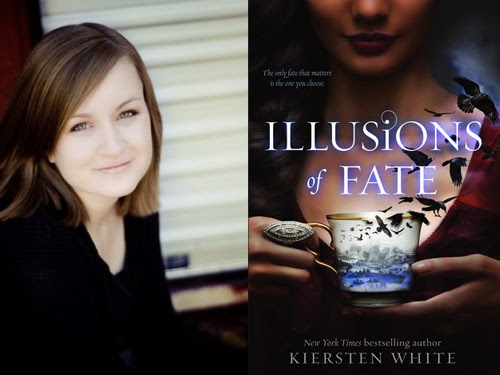 Kiersten White is the NYT bestselling author of the Paranormalcy trilogy and the Mind Games series, as well as several standalone novels. She has one tall husband and three small children and lives near the ocean, where her life is perfectly normal.

Illusions of Fate (HarperTeen, 2014)
Add this book on Goodreads

Jessamin has been an outcast since she moved from her island home of Melei to the dreary country of Albion. Everything changes when she meets Finn, a gorgeous, enigmatic young lord who introduces her to the secret world of Albion’s nobility, a world that has everything Jessamin doesn’t—power, money, status… and magic. But Finn has secrets of his own, dangerous secrets that the vicious Lord Downpike will do anything to possess. Unless Jessamin, armed only with her wits and her determination, can stop him.

Kiersten White captured readers’ hearts with her New York Times bestselling Paranormalcy trilogy and its effortless mix of magic and real-world teenage humor. She returns to that winning combination of wit, charm, and enchantment in Illusions of Fate, a sparkling and romantic new novel perfect for fans of Cassandra Clare, The Madman’s Daughter, and Libba Bray.