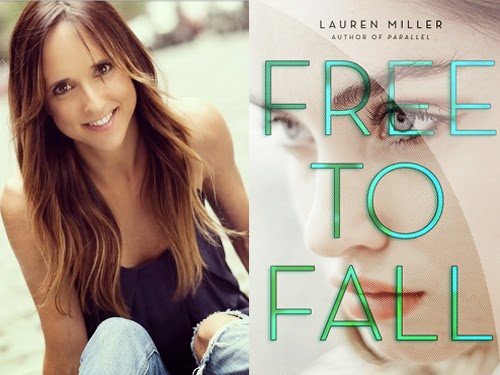 Lauren Miller grew up in Atlanta, went to college at Yale and law school at Berkeley, then got married and moved to Southern California to practice law. While she liked her work, she began to crave something more creative and started writing. Soon, she was ducking out of work to go to pitch meetings at studios and networks. She now writes books and screenplays in Los Angeles with her husband and daughter.

Free to Fall (HarperTeen, 2014)
Add this book on Goodreads

Fast-forward to a time when Apple and Google have been replaced by Gnosis, a monolith corporation that has developed the most life-changing technology to ever hit the market: Lux, an app that flawlessly optimizes decision making for the best personal results.

Just like everyone else, sixteen-year-old Rory Vaughn knows the key to a happy, healthy life is following what Lux recommends. When she’s accepted to the elite boarding school Theden Academy, her future happiness seems all the more assured. But once on campus, something feels wrong beneath the polished surface of her prestigious dream school.

Then she meets North, a handsome townie who doesn’t use Lux, and begins to fall for him and his outsider way of life. Soon, Rory is going against Lux’s recommendations, listening instead to the inner voice that everyone has been taught to ignore — a choice that leads her to uncover a truth neither she nor the world ever saw coming.