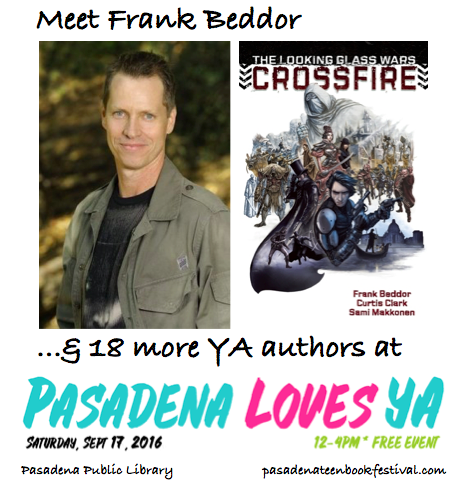 About The Looking Glass Wars: CrossFire:

How does Alyss Heart of Wonderland fare after the creation of Everqueen, as described in Arch Enemy, the third volume of the best-selling Looking Glass Wars trilogy? With difficulty. Fending off political assaults from rival suit families, struggling to maintain diplomatic relations with the tribes of Boarderland, Alyss is more vulnerable than ever before. After she barely escapes an attempt on her life, no longer sure whom to trust, she aligns with controversial new allies in order to keep Wondertropolis safe and prevent havoc on Earth. And yet the fight, the battle, finds her—as it seemingly always does—and Alyss discovers that all decisions, even the right ones, have consequences.

About Frank Beddor:
Frank Beddor's route to best sellerdom has been circuitous. But circuitous routes are nothing new to this former World Champion freestyle skier. A sport from which he retired to pursue a career in show business. First as a stunt man doubling John Cusack in Better Off Dead, then an actor and finally a producer. He is probably best known for producing the hit Cameron Diaz and Ben Stiller vehicle There's Something About Mary.

This success gave Beddor the chance to indulge his passion for writing. He spent several years writing the Looking Glass Wars trilogy, a unique take on Alice in Wonderland. It became a hit in both the UK and US, spending 21 weeks on the New York Times Best Seller List. It has also inspired the Eisner nominated graphic novel series Hatter M based on the series' blade-wielding analog for the Mad Hatter. There have been six graphic novels in the series published to date: Far from Wonder, Mad with Wonder, Nature of Wonder, Zen of Wonder, Love of Wonder, and Seeking Wonder. Over 800,000 books set in the Looking Glass Wars universe have been sold to date.

Based on the decade-plus successes of the Looking Glass Wars, Beddor launched Automatic Publishing in Spring 2016 with four spectacular titles: Hatter Madigan: Ghost in the Hatbox, the first of a prequel series starring a young Hatter Madigan depicting his adventures from orphaned Millinery cadet to unprecedented protector of two queens; Static, a twisty mystery and a powerful testament to the bond between brothers, told in a fresh, witty voice; Looking Glass Wars: Crossfire a graphic novel sequel to the Looking Glass Wars Trilogy; and Spectrum, a gripping sci-fi comic book tie-in to the hit web series Con Man.

Automatic Publishing has developed a unique marketing strategy that focuses on the very personal author-reader connection. The company operates on a continuous marketing model: pre-publication buzz campaigns, on-pub activation campaigns, and responsive post-publication campaigns that support booksellers, librarians, educators and fans all year round. This continuous marketing model ensures books connect with audiences where they are: in schools, in stores, in libraries and online. A wealth of visually-driven content is created, with particular emphasis on short form video — VFX trailers, character animations, authors in dialog with characters — that can be utilized on a variety of social media platforms, and is made available to booksellers, librarians, educators and traditional media outlets.  A schedule of personal appearances across the country is developed and expanded upon throughout the life of the books.