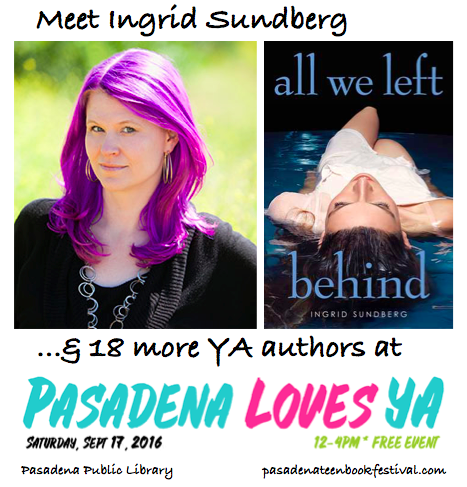 About All We Left Behind:

For fans of Simone Elkeles and Courtney Summers, this haunting debut novel is about two teenagers battling their inner demons as they fall in love for the first time.

When Marion Taylor, the shy bookworm, meets sexy soccer captain Kurt Medford at a party, what seems like a sure thing quickly turns into a total mess. One moment they’re alone in the middle of a lake, igniting sparks of electricity. The next, they’re on dry land, pretending they’ve never met. But rather than the end, that night is the beginning of something real, terrifying, and completely unforgettable for them both.

As Marion and Kurt struggle to build a relationship from the fractured pieces of their pasts, every kiss they share uncovers memories both would rather keep buried. Marion desperately wants to trust Kurt and share the one secret she’s never told anyone—but some truths aren’t meant to be spoken out loud. Kurt is also still haunted by his mother’s death, by the people he hurt, and by the mistakes he can never take back.

Explosive together and hollow apart, Marion and Kurt seem totally wrong for each other—but could they turn out to be more right than they ever thought possible?

Akira Kurosawa said: “To be an artist means never to avert one’s eyes.” I’m passionate about stories that look into the shadows of our vulnerability and challenge us to see the white-hot center of who we are. For me, reading and writing is a safe place to explore the depths of humanity, what we desire, and the secrets we hide.

I grew up on the small island of Mount Desert off the coast of Maine. I’ve since moved to sunny Southern California, but my heart still yearns for the delicious colors of autumn. I love polka dots, baking, and dying my hair every color of the rainbow.

I hold an MFA in writing for children from Vermont College of Fine Arts and an MFA in screenwriting from Chapman University. I also have a BFA in Illustration from the Massachusetts College of Art. I’ve been a freelance story editor, illustrator, and graphic designer for many years. In addition, I’ve taught college classes, worked on film sets, and been a children’s bookseller. All We Left Behind is my first novel.