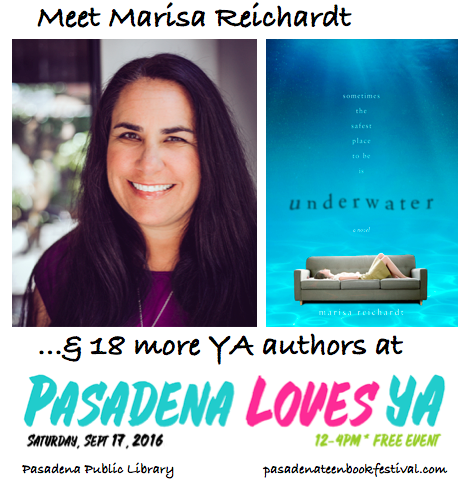 “Forgiving you will allow me to forgive myself.”

Morgan didn’t mean to do anything wrong that day. Actually, she meant to do something right. But her kind act inadvertently played a role in a deadly tragedy. In order to move on, Morgan must learn to forgive—first someone who did something that might be unforgivable, and then herself.

But Morgan can’t move on. She can’t even move beyond the front door of the apartment she shares with her mother and little brother. Morgan feels like she’s underwater, unable to surface. Unable to see her friends. Unable to go to school.

When it seems Morgan can’t hold her breath any longer, a new boy moves in next door. Evan reminds her of the salty ocean air and the rush she used to get from swimming. He might be just what she needs to help her reconnect with the world outside.

Marisa Reichardt is a SoCal native who has paid the bills by shucking oysters, waiting tables, peddling swimwear, tutoring, and writing. She currently lives in Los Angeles with her family and can usually be found huddled over her laptop in coffeehouses or swimming in the ocean. She has a Master of Professional Writing degree from the University of Southern California and dual undergraduate degrees in literature and creative writing from UC San Diego. Her debut novel, Underwater, was an Indies Introduce New Voices pick for winter/spring 2016 and an Indie Next Top 10 pick for winter 2016.