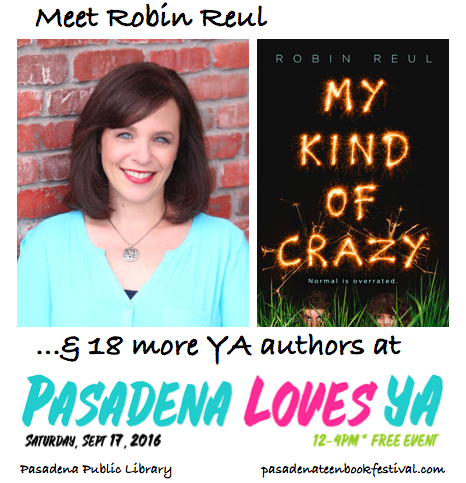 About My Kind of Crazy:

Despite the best of intentions, seventeen-year old, wisecracking Hank Kirby can’t quite seem to catch a break. It’s not that he means to screw things up all the time, it just happens. A lot. Case in point: his attempt to ask out the girl he likes literally goes up in flames when he spells “Prom” in sparklers on her lawn…and nearly burns down her house.

As if that wasn’t bad enough, Peyton Breedlove, a brooding loner and budding pyromaniac, witnesses the whole thing. Much to Hank’s dismay, Peyton takes an interest in him—and his “work.” The two are thrust into an unusual friendship, but their boundaries are tested when Hank learns that Peyton is hiding some dark secrets, secrets that may change everything he thought he knew about Peyton.

About Robin Reul:
Robin Reul has been writing since she was in early elementary school, when she used to make her own book club flyers for her classmates and then pen them original stories. At thirteen, she had her first meeting with a major publisher, and the dream of someday being a published author firmly took hold.

As the daughter of a film producer, she spent her childhood on location, growing up on movie sets, and developing a fine appreciation for strong black coffee. She graduated from Boston University with a degree in Broadcasting and Film, and worked for many years in the film and television industry, both as an actress and in motion picture development. One of her favorite jobs was working as an Outreach Assistant for the Disney/PBS show “Bill Nye The Science Guy.” Ultimately, Robin decided to return her focus to writing young adult novels full-time. She likes to write the same sort of stories that helped get her through her teenage years: funny, honest stories filled with quirky, memorable characters that at the end of the read, make you feel like you’ve just had a visit with a good friend.

When she’s not writing, Robin can be found singlehandedly driving up the profit margin of her local Starbucks and indulging her love of baked goods, particularly those in the key of pumpkin.  She lives in Los Angeles suburbia with her husband, son and daughter. MY KIND OF CRAZY is her first novel.