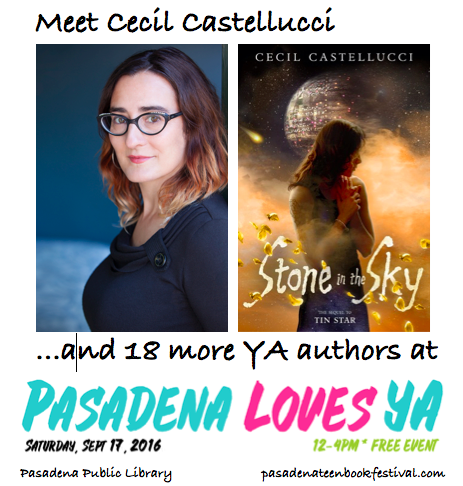 About Tin Star, book 1 in the series:

On their way to start a new life, Tula and her family travel on the Prairie Rose, a colony ship headed to a planet in the outer reaches of the galaxy. All is going well until the ship makes a stop at a remote space station, the Yertina Feray, and the colonist's leader, Brother Blue, beats Tula within an inch of her life. An alien, Heckleck, saves her and teaches her the ways of life on the space station.
When three humans crash land onto the station, Tula's desire for escape becomes irresistible, and her desire for companionship becomes unavoidable. But just as Tula begins to concoct a plan to get off the space station and kill Brother Blue, everything goes awry, and suddenly romance is the farthest thing from her mind.

Stone in the Sky is book 2 in the Tin Star series.

Cecil Castellucci is the author of books and graphic novels for young adults including Boy Proof, The Plain Janes, First Day on Earth, The Year of the Beasts, Tin Star, Stone in the Sky and the Eisner nominated Odd Duck. Upcoming in 2015 is Moving Target: A Princess Leia Adventure. Her picture book, Grandma’s Gloves, won the California Book Award Gold Medal. Her short stories have been published in Strange Horizons, YARN, Tor.com, and various anthologies including, Teeth, After and Interfictions 2. She is the Children’s Correspondence Coordinator for The Rumpus, a two time Macdowell Fellow and the founding YA Editor at the LA Review of Books. She lives in Los Angeles. www.misscecil.com
Posted by Jane Gov at July 04, 2016