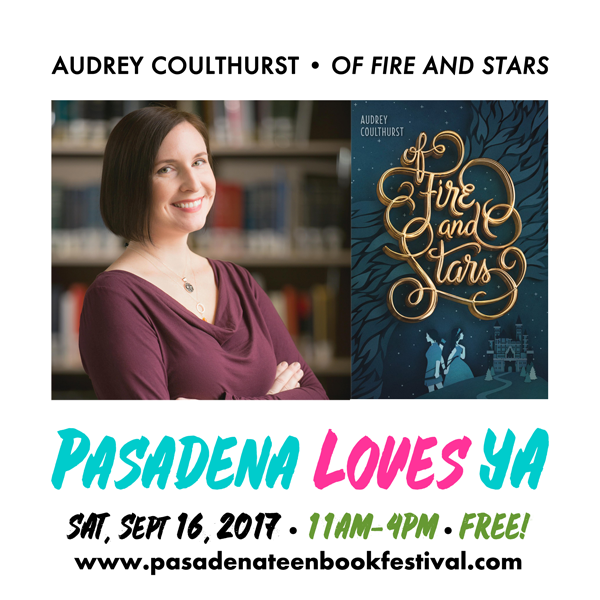 Audrey Coulthurst writes YA books that tend to involve magic, horses, and kissing the wrong people. Her debut novel, Of Fire and Stars, was published on November 22, 2016 by Balzer + Bray/HarperCollins. When she’s not dreaming up new stories, she can usually be found painting, singing, or on the back of a horse.

Audrey has a Master’s in Writing from Portland State University, is a member of SCBWI, and studied with Malinda Lo as a 2013 Lambda Literary Foundation Fellow. She lives in Santa Monica, California.

Her forthcoming novel, Inkmistress, will be released on March 6, 2018 from Balzer + Bray/HarperCollins.

Find out more about Audrey at

About Of Fire and Stars

Two princesses fall in love with the wrong people—each other.

Betrothed since childhood to the prince of Mynaria, Princess Dennaleia has always known what her future holds. Her marriage will seal the alliance between Mynaria and her homeland, protecting her people from other hostile lands. But Denna has a secret. She possesses an Affinity for fire—a dangerous gift for the future queen of a kingdom where magic is forbidden.

Now, Denna must learn the ways of her new home while trying to hide her growing magic. To make matters worse, she must learn to ride Mynaria’s formidable warhorses before her coronation—and her teacher is the person who intimidates her most, the prickly and unconventional Princess Amaranthine (called Mare), sister of her betrothed.

When a shocking assassination leaves the kingdom reeling, Mare and Denna reluctantly join forces to search for the culprit. As the two work together, each discovers there’s more to the other than she thought. Mare is surprised by Denna’s intelligence and bravery, while Denna is drawn to Mare’s independent streak. Soon their friendship is threatening to blossom into something more.

But with dangerous conflict brewing that makes the alliance more important than ever, acting on their feelings could be deadly. Forced to choose between their duty and their hearts, Mare and Denna must find a way to save their kingdoms—and each other.