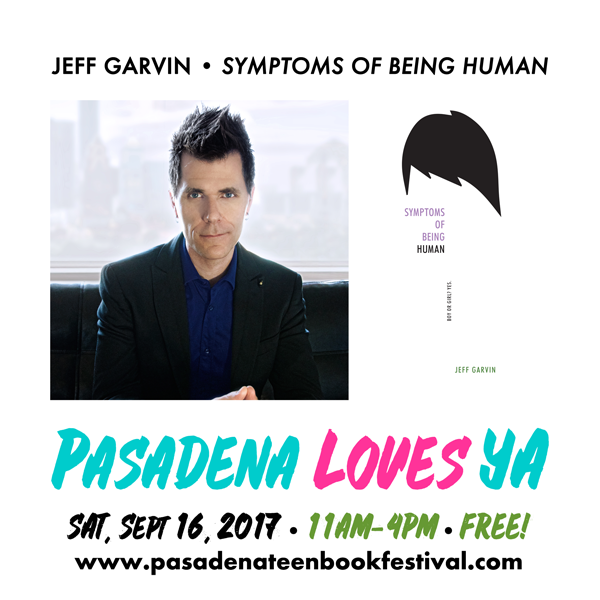 Jeff Garvin grew up in Orange County, California, the son of a banker and a magician. He started acting in high school, and enjoyed a fifteen-year career including guest-starring roles in network television series ranging from The Wonder Years to Roseanne to Caroline and the City. Recently, he’s returned to the big screen in an independent horror feature.

While studying at Chapman University, Jeff won awards for classical guitar and visual storytelling before graduating with a BFA in Film. As the front man of his rock band, 7k, Garvin released three albums and toured the United States. When the band dissolved in 2011, Jeff, who had always written short stories and lyrics, found his passion in full-length fiction.

His debut novel, Symptoms of Being Human, tells the story of Riley, a 16-year-old gender fluid teen who starts an anonymous blog to deal with hostility from classmates and tension at home. But when the blog goes viral, a storm of media attention threatens Riley’s anonymity. The novel is an ALA Best Fiction for Young Adults Selection, a Lambda Literary Award Finalist, and garnered starred reviews from Booklist and Publishers Weekly. It is available now from Balzer + Bray / HarperCollins

Jeff lives in Southern California with his wife, children, dog, cats, and a respectable collection of books and guitars.

Find out more about Jeff at

About Symptoms of Being Human

The first thing you’re going to want to know about me is: Am I a boy, or am I a girl?

Riley Cavanaugh is many things: Punk rock. Snarky. Rebellious. And gender fluid. Some days Riley identifies as a boy, and others as a girl. The thing is…Riley isn’t exactly out yet. And between starting a new school and having a congressman father running for reelection in uber-conservative Orange County, the pressure—media and otherwise—is building up in Riley’s so-called “normal” life.

On the advice of a therapist, Riley starts an anonymous blog to vent those pent-up feelings and tell the truth of what it’s REALLY like to be a gender fluid teenager. But just as Riley’s starting to settle in at school—even developing feelings for a mysterious outcast—the blog goes viral, and an unnamed commenter discovers Riley’s real identity, threatening exposure. Riley must make a choice: walk away from what the blog has created—a lifeline, new friends, a cause to believe in—or stand up, come out, and risk everything.